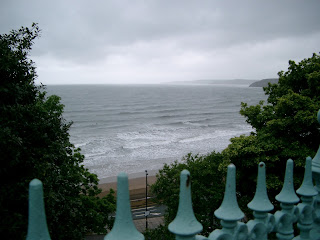 We're now definitely experiencing the beginning of the Autumn/Fall.
There is that cold nip in the air early morning and early evening and the nights drawing in. The sky looks very grey. I'm staving off putting the heating on, though, as it isn't October yet. It seems more acceptable to turn it on in October unless there's a late heatwave.

I'm quite pleased that I've got through my first year of bereavement unscathed. I've done quite a few things that I set out to do in the house..... had the outside painted, the kitchen damp problem hopefully righted, faulty window hinges replaced, changed phones..... all things that people do everyday without thinking, but a bit daunting when having to arrange it all by myself when not used to it. I've kept the garden up together put different curtains and fittings up that didn't require me to drill in to anything. I'm really pleased about that.
It's good to know I can manage.
I've also rejoined the community choir I used to belong to before having to resign so that I could look after Harry. Rejoining involves giving up a bit of time for practice and performances that they do. However it's all optional and I can do as much or as little as I need to do.
I've been on several holidays and made a couple of new friends here at home.
My youngest grandson has just gone off to university which has made the family very proud of him. My daughter, older grandson and I went with him this last weekend to settle him into his new lodgings which seem very suitable and the other students and their parents were very nice people.
So things seem to be working out, thankfully. 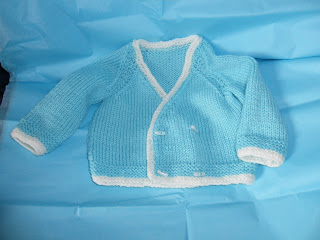 I've been keeping very busy with knitting.  It has helped me to keep my mind off thinking about the anniversary of Harry's death which has just gone.
Now I've come round full circle..... a whole year of Birthdays, Anniversary's etc without him.

I seem to have knitted a few baby things for various people over the last few weeks. 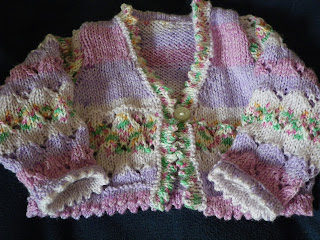 This one was for my great niece who has just celebrated her 1st Birthday and the turquoise one is for a neighbour's new born son but I have two more to do in that style and maybe the same colour for other baby boys. 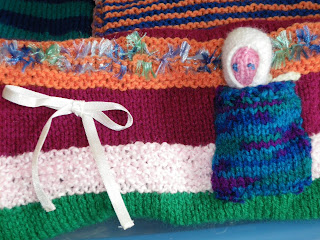 I'm also knitting twiddle muffs for patients with dementia at our local hospital. Apparently, they love to fiddle with things and inside the muff there are various things incorporated in the knitting to twiddle with.
So all in all, I seem to be quite busy.