Stuck Between A Rock And A Hard Place

The very next day from the last post I wrote, Harry started to be very ill and although I'd called the doctor, by the next day on my Thursday afternoon out, his carer phoned me to say that Harry was in a state of collapse and he was getting the ambulance. Fortunately, I was only ten minutes away because I knew he wasn't well and had decided to stay in the local vicinity.
He was kept in a general hospital for a few days and then transferred to the Bristol Cancer Hospital, where he still is now.
Trouble is, each time he has one of these episodes, he is left more disabled than the last time. I have noticed that he is now unable to transfer from bed to any apparatus he needs without support. I see that in the hospital he has a notice over his bed stating that he needs 2 people to support his weight. I know in my heart I'm not physically capable of supporting or lifting him. I know my own health problems and weaknesses, though I love him and want to help him. He deserves that.

I now learn he doesn't have the criteria to go into a Nursing Home as he is too able bodied and I would have to fully fund it if I insisted. They can't tell me how long this situation is likely to go on.
I wonder what state of physical decline I would have to get into before I get listened to?
The NHS is in a tricky situation, I know, but there must be thousands of carers at their wit's end trying to cope with situations like this or even worse. The only thing we can do is empathise with each other as no one else can possibly know what its like until they get into this situation.

I really can't apologise enough to all the people who I normally visit and leave comments on their blog.
I don't seem to be able to get much time for blogging although I really want to keep things going.
Please bear with me for a while........ 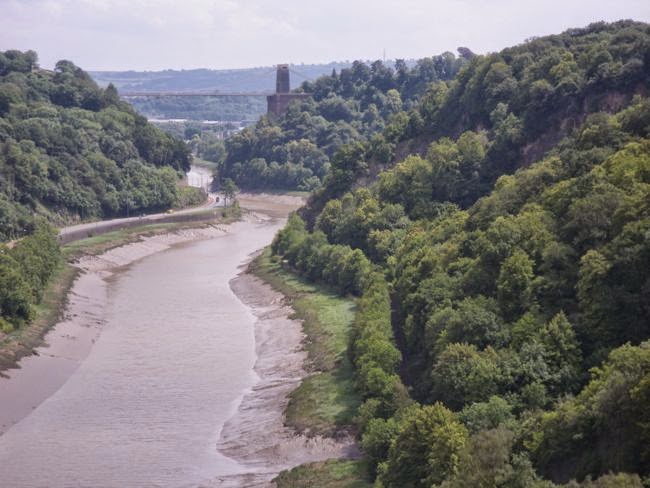 Thursday afternoons come round quite quickly.
It is my time of respite when a carer comes in to sit with Harry and keep him company, maybe take him out or just see that he keeps safe while I'm gone.
I get 4hours to myself.
I sometimes manage to get into town and see some different shops and buy things that I can't normally get in my local high street.
Other times I get a bus to The Downs and sit in a shady place reading a good book or just sit and people watch.
Sometimes I meet up with a friend.
The Avon Gorge in the photo above is a picture I took looking down from one of my Thursday walks before my hip started to hurt. I hurt my back and hip while trying to push Harry along our awful pavements in a wheelchair about six weeks ago. I won't be doing that again and I'm still having a lot of pain from it.
I go to the Museum or walk round the Water Front, off the Centre of Bristol but seem to be running out of ideas. Many of these things need to be done in the better weather, which we now seem to be running out of.

I am really grateful for this time to myself.
However, what I'd really like to do is to hop on a bus to our local seaside or go to the Cinema but there isn't time. The hours that I've been allocated don't fit in with the right time for the Cinema and coincide with the rush hour late afternoon.
Unfortunately, because we haven't a car, it would take too long to get out of the city and then back in. Even with a car it might be difficult to get back across the City. It is too stressful to even think about in case I didn't get back in time after the carer left.

I've recently started going to a Carer's course run by our local Hospice. The course is only for a few weeks and I've met people with similar and also very different situations. It does help to share and we all have similar feelings. I realise that compared to some I am very lucky. It must be awful to look after a young person with *locked in* syndrome, as one in the group  has to do ....... maybe for years and years.
There is always someone in a very much worse position than myself.
I think the group does help me in that respect.
I am not alone with it.

Have I Gone Too Far?

As I still help with the local Brownie pack one night a week, I was really looking forward to a *hedgehog rescue lady* coming to talk about them and possibly bringing some along for us to see.
Well, she did bring one round for us to see, but not touch. It was one that couldn't be returned to the wild because it was *not too bright* and didn't have the instincts to keep away from humans or other animals. The one she brought would need to live in the sanctuary for the rest of its life for it's own safety.
I've always been quite fond of hedgehogs ...... not that they seem to be prolific round our way and they do get squashed on the roads in the country side and towns alike. Other than that, I don't really see any but they do seem to be lovely little beasts who keep the garden free from slugs and snails and need to be encouraged at all costs.
I was first introduced to them at an early age through Beatrix Potter's The Tale of Mrs Tiggy-Winkle book.

I came away from the Brownie pack meeting a changed person.
From then on, I squashed my washed out tins of food before putting them into the collection bins as hedgehogs often get their heads stuck and end up being horribly injured or starved to death. The same with yoghurt containers that are now slashed down the sides and plastic bags that are tied in a knot before going into the waste. Netting is really horrible stuff that needs to be knotted so as not to entangle little creatures.
There were whole lists of things to do and not to do in order to keep the hedgehog population from extinction.
Human beings do seem to be sending these prickly creatures to an early grave as well as our pets who also maul them about.
So now I go for walks and notice other peoples' hedgehog hazards. Instead of looking at their lovely displays of plant life, I'm noticing things in their waste containers that need to be squashed and made safe.

I recently found myself watching an unfortunate spider that had fallen into a tray under my dish draining rack. The spider had got soap on its legs and was struggling to get out of the rack. I put a tissue from the water to the other side of the tray (as I don't like spiders so didn't want to touch it but felt sorry for its predicament.)
After a while my plan worked. It recovered enough to climb up the paper and ran to safety, amongst my dish mops.
Have I taken this *saving creatures* lark too far?
The spider is still out there in my kitchen somewhere.