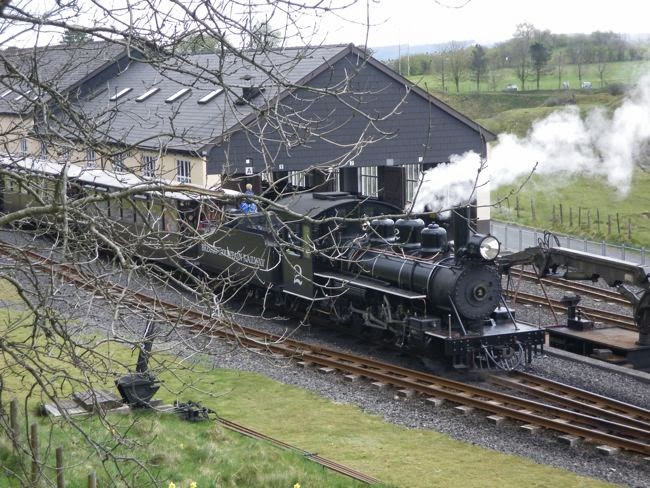 
My daughter had come over from the east coast with my grandsons to spend the four days of the Easter holiday with us, so when we realised that Saturday was a warm, dry day, we packed a picnic and travelled by car setting off mid morning for the Brecon Beacons, which is situated in Wales. We crossed from Bristol via the Second Severn Bridge (three miles long) on which I once did a sponsored walk across and back, the day before the bridge officially opened a good few years ago.
As it turned out, we were wise to choose Saturday for that trip as the two remaining days went much colder with rain.

My grandsons are steam train fanatics and they've visited many different lines in Britain but so far hadn't been to this one and neither had I. I'm getting used to doing this kind of trip with them though Harry didn't feel at all up to going, so he relaxed at home and I'd left him a cold lunch which he had with some soup. I worried about him a bit but he answered all my texts to let me know he was Ok.
We had a lovely time and when we were almost home, I popped into a fish and chip shop that we think are the best in Bristol and I brought home a steaming hot portion for Harry, which he really enjoyed.

It seems very quiet now that the family have all gone and we are just the two of us again.
Hope you all had a happy time too. 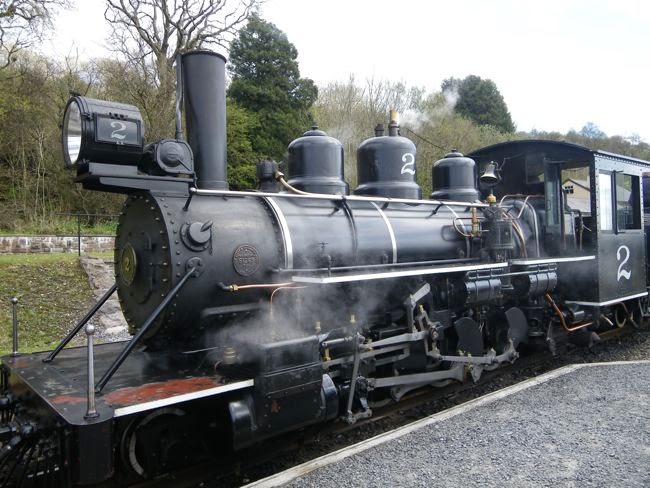 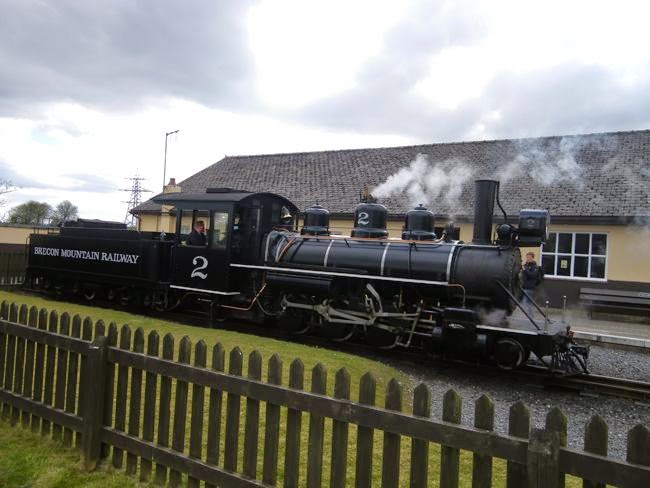 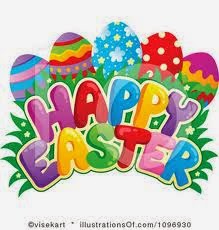 Wishing you all a Happy and blessed Easter time.

I shall probably do my share of eating chocolate, but to Christians, Easter is more than eggs, chocolate little bunnies and chicks.
Jesus died for me (and you) and is now risen! 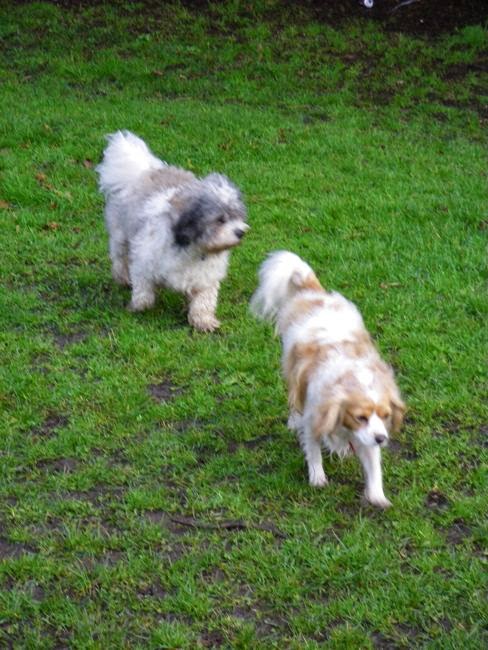 Since I reluctantly had to re-home my rabbits back in September, visitors are now able to bring their dogs round if they wish to.
My son inherited two Cavapoos when he got together with and later married Sandy and the dogs come round at fairly regular intervals. They are a cross between Cavalier Spaniels and Poodles. One looks very like a Cavalier and the other other one has curly, fluffy hair that doesn't moult, more like a Poodle. 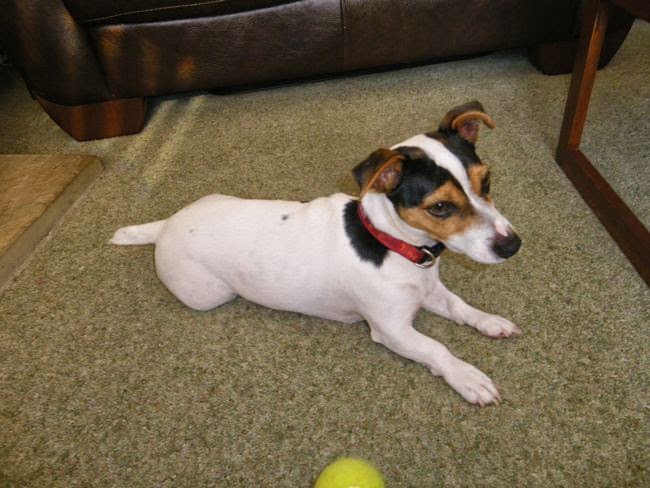 The Jack Russell belongs to Harry's twin and his wife and she comes regularly to visit here. So far, the three dogs have never met but they are all aware and a bit disturbed when they sniff the scent that has been left in the house and they search around nervously at first before settling down.

Early one morning, Sam brought round his two dogs when he had to drop the girls round before school and as it was a fine, dry day, I made the mistake of letting them out in the garden and I had noticed them rolling about on the path at the far end.
When they came back in, there was the most terrible smell. Farmyards and muck spreading is the only way I can describe it.
We live in a small city house with a tiny garden but we do get foxes passing through. I can only assume that they had rolled in fox mess and before we could stop them, they proceeded to  roll all over the carpets in the back room and the kitchen floor leaving the foulest of smells everywhere.
Sam immediately took the dogs home to bathe them, not pleased as it had upset all his plans for the day.
One of the girls started to cry as the smell was really bad. I filled a bucket with soapy hot water and disinfectant, got down on my hands and knees and washed the whole place down and that took a lot of washing. All through the day, the smell persisted and in all, I had to repeat the carpet washing twice more until neither Harry nor I could detect any odour.
I then took a bucket of water with disinfectant to clean off the path outside.
I had certainly had my early morning work out that day!

After a week or so, I'd forgotten all about the incident until the Jack Russell next visited and she seemed very disturbed and rolled all over the carpets and then went into the kitchen which is fortunately tiled, and did a huge pee.
Is it a sign of my love for them that I just clear up their messes or is it that they do these things because they feel at home and love us?
Little rascals. 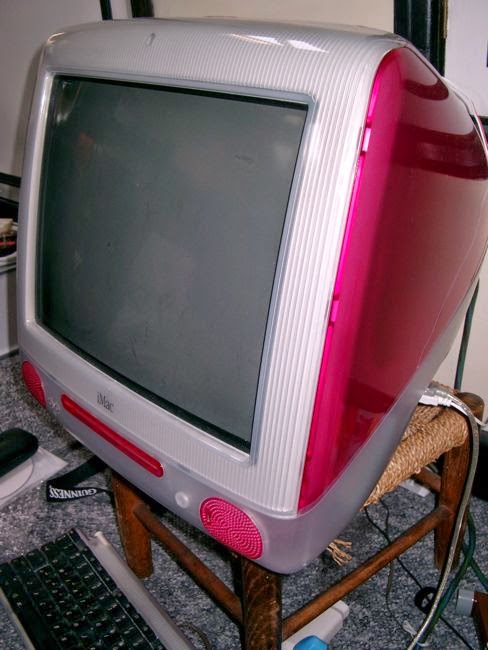 Six years ago, I'd never heard of a blog let alone owned a computer. I didn't have the faintest inkling how to use one nor did I ever want one.
However, my son, who lived in Japan at that time, must have wanted me to email him instead of using the snail mail and he hated writing letters anyway and phone calls were expensive.

Sam must have been visiting and was here in the New Year and he generously treated me to my first ever computer which happened to be a pink iMac, pictured above.
"I'll never be able to use it," I protested. He was leaving for home within a few days so I tried to learn fast, making copious notes that I don't even understand to this day.
Before leaving, he had told me that he thought I'd be good at blogging so he set one up for me. I was panic stricken. How would I cope when things went wrong?
Anyway, I started blogging in earnest early in 2008.
It was quite a while before I received any comments and what a big day that was! Someone had actually read my post and bothered to leave an answer.
There seemed to be a whole community of bloggers out there and very soon I got into the swing of things and back then it seemed to be the fashion to give and receive awards. That seems to be a thing of the past now, thankfully, as it did involve quite a lot of hard work putting in links and sending them on. I can still remember the thrill of my first one though, even though it seems slightly ridiculous now.

I often wonder if Sam regrets getting me that computer, as he has been the first port of call when things go wrong (and they frequently do) and even though I've got through several different models since that first iMac, I still live in dread of breakdowns and I don't really understand much more about computers now than I did in the first place. I regard myself as a technophobe though I'm really trying to get out of that.

Looking back, it seemed totally different to the blogging life today.
Not many of my original blogging family are still writing now, though some are.
I think Facebook and Twitter have taken away most of them and I don't take part in either of those.
I really appreciate my present blogging friends and value comments very much but I don't take it as seriously as I used to and only seem to write a post  once a week, whereas I'd publish at least three in the old days.
I live a fairly full life, have many interests, family, friends, church and other activities and hobbies...... so why do I keep thinking of the many people who I considered to be good blogging friends and wonder what they are doing now and how they are? I really miss them.
Is that pathetic or what?