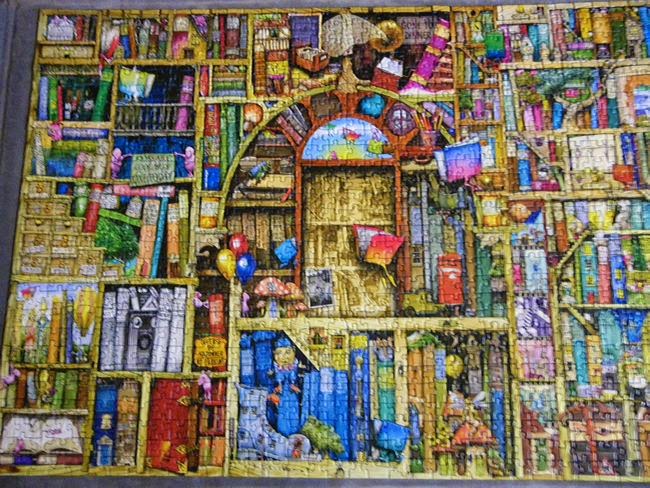 Two more 1000 piece jigsaws have helped to keep me amused during winter weather. I usually have one on the go in the front lounge where I often hide away when Harry is watching football or films that I don't like in the back room, which now is his bedsit.
He is still waiting to hear from the hospital about his shunt. Nothing gets done very fast over here. 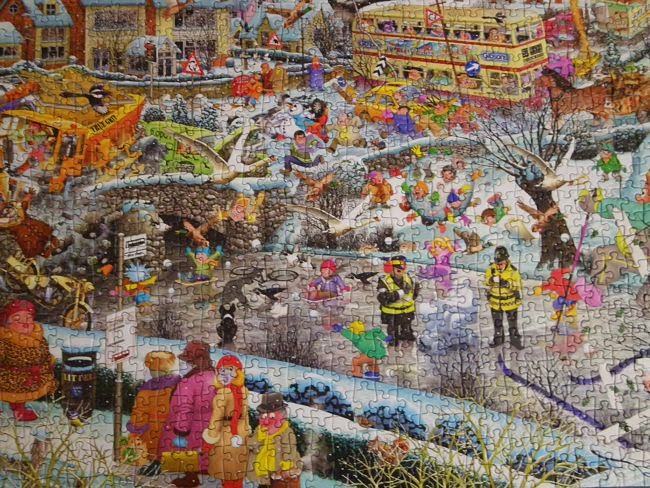 Very soon, I shall be busy making the garden tidy as the weather steadily improves. Already the days are lengthening and it is still light at five pm now, which is much better than it was around Christmas when it started to get dark at 3.30.
My snowdrops did emerge a couple of weeks after I complained that they seemed to have disappeared.  Nature sees to it that they come up at the right time so I needn't have worried.
The jigsaws will most likely be stored away now that there will be so many other things to do. All the year through, I usually have a good book on the go and have got into the habit of reading in bed till I fall asleep. One of the advantages of being on my own. I can do what I like.

Our lives seem to go round in a a circle of seasons just like the weather outside, though I doubt very much whether I will be shedding any clothes just yet as it is still a bit chilly.
There is a saying in Britain, *Don't cast a clout till May is out.* Not sure if that means the month of May or when the first flower of the May bursts forth, which will happen a little bit earlier.
It's supposed to be unlucky to bring the May flower into the house, another of our sayings.
I wonder where these sayings came from and what they really meant.
Off to Google that now.

I admire you because you are a patient person with puzzles. It is definitely boring for me. At my place the weather is great. It is an early spring 10C degrees at day.gRETINGS FROM pOLAND

Yes, indeed,you are most patient. I can sit with a book, or a movie, but puzzles frustrate me. Looking forward to better weather for outdoor activities.

You do puzzles like I do knitting I think, relaxing AND engaging at the same time. Your first one - I think I used a pic of it once on a blog post on my books.

We've had some rough weather here and have the illusion it's all behind us, ha!

Golly, I'm so familiar with that saying, mum said it all the time, and I have wondered too if it's the month of May or the May blossom that should be out. There won't be any "casting of clouts" here, it's -24C outside!!! I'm sure you can't even imagine how cold it is. Nice puzzles, well done, I haven't done one for ages, except large piece "Dora" and dinosaur puzzles with my little people.

I'm going to have to look up that saying about the "clout" now to figure out what it means. May can sometimes be chilly here, too, so perhaps it's wise advice for anyone. I admire your patience with jigsaws, Maggie. My mother sometimes does them, but I don't have the patience. But I have been doing a lot of reading this winter--I would say it helps me to fall asleep, but often I stay up too late because I can't put the book down!

I'm like Shammikite - do Dora and fireman puzzles with the kids on the floor. That's more my speed. So glad you can enjoy your puzzles to while away those cold winter days.

It would be good to get out into the garden, but I am not expecting to be able to do so until mid March.

I always thought thay the May in question was the month.

Those idioms are always a puzzle. You must let us know what they mean and where they came from.

Your puzzle completing skills are simply amazing. I keep thinking I will start a jigsaw puzzle with my husband, but I can see us really getting one done. I'd rather read, or fritter my time away on the computer. You have something to show for your time.

The lovely crocus that bloomed in our yard last week are now under about a foot of snow, which I expected would happen. The puzzles are quite wonderful, so much more interesting than the ones I can remember putting together when I was much younger. My mom loved jigsaw puzzles and spent many happy hours with her granddaughters working on them. I don't have a place now to lay out a puzzle and work on it "off and on".

You choose the kind of puzzles I like doing... colourful and fun. I've only done one so far this year. But winter lasts a long time up here.. I suspect there will be at least one more before spring comes along.

I was watching a couple of people sharing a jigsaw puzzle yesterday whilst waiting to be chosen for a jury, anything to relieve the boredom!

I went and bought my sweet pea seeds today - just that act made me feel as if the seasons are changing and I'll soon be in the garden again. Can't come soon enough after the long, cold winter.