Shut In By Ice 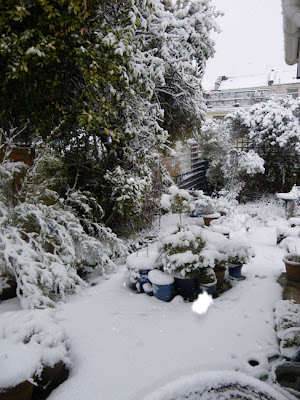 We live in a road that lies between two side roads leading into our busy High Street. It is less than five minutes to the High Street, where all the shops are but I might as well have been trapped on the moon these past few days.
The trouble is that the side roads and pavements are never cleared of snow, making it impossible to get to the shops. There is a slight incline making matters worse.
Harry is well into his second chemo and as he has a problem with his balance anyway, I have dissuaded him from going anywhere where there are icy conditions. I have a problem with painful bones and I don't want to risk breaking any of them on the ice because then we would be in an even worse position if I was out of action completely.

My son, Sam, kindly took me to a major supermarket the other day and that enabled me to buy masses of supplies, so that I don't really need to go out at all now for days. However, I have been suffering from locked in cabin fever. I just like to get out and stretch my legs and haven't been able to do a reasonable walk for what seems to be a long time.
Today, though, there was a bit of a thaw so I did venture out for a breath of fresh air. Harry also had a little walk to the end of the street as far as the place where all the ice starts to be really slippery.

When I was young, everyone would pitch in with their shovels and salt, clearing the pavements in next to no time. There wouldn't be a problem for older folk to get their shopping in and to stretch their legs.
Everyone would pull together as a community. Today, I think people are scared of clearing their paths in case they are sued if anyone slipped and got hurt. I guess this is a myth because the Council have openly said that this doesn't happen and that people should clear their pavements. Of course many people feel that we pay Council Tax and think they should clear it but in reality the Council only clears the major roads and high streets leaving all pavements and side streets unprotected and everyone has to manage as best we can.
In England, everything seems to come to a halt when it snows causing schools to shut, buses to be cancelled and all activities to cease. Eventually things get reorganised and get back to normal but the people in the iced up side roads seem to be the last to be able to do anything. It all takes time to thaw.
Yes, snow does look beautiful when it first falls and it is magical for children, racing about on toboggans and building snowmen but the problem starts for most people when it frosts over and theres just a sludgy, icy, slippery mess.
Well maybe thats the end of it for now. I know I sound like a Scrooge but enough is enough. Am I the only one who feels like this? Forgive me if I am.

No you're not a Scrooge and you're not the only one, I feel that way too.

When I wake up and there's snow on the ground I thank God I'm retired and don't have to go out in it.

No - the little side streets get a raw deal, every time! I have a great neighbour who does sterling work clearing the strip of pavement in front of our little terrace, but from there to the main road - nightmare! Keep safe and keep warm :) ♥

I pray for more people to pitch in and help his/her neighbor, like they did long ago.
Hopefully, things will warm, the ice will be gone, and you will be able to get out and away from cabin fever.
Hugs to you and Harry, my friend.
Love you,
Jackie

My street and most of the sidewalks around it are not cleared of snow and ice either and it makes for treacherous walks with the dog. Now that I have my physical problem, I do walk less until it starts to thaw, which will be this weekend, and I am glad about that. I will very happily go out again and walk all over the place. What a relief that will be. xox

Maggie, it's exactly the same here in Ireland.
2 years ago when we had the Big Freeze, the Council told people they wouldn't be sued and to go ahead and clear paths, but few enough did.
I hate that mentality that "we pay them to do it"- they're not going to be able to clear all paths, and honestly, it wouldn't kill any of us to get out and just do it, especially in the interests of our older or infirm neighbours. We had fun clearing ours, and chatted with people as we scraped.
What has happened to society? I find it very sad.
Hope your thaw lasts,we've only had a few flakes here.

Here in Canada too. The side streets are ploughed last, but eventually they get done. I can't complain about our snow-removal crews as the trucks and snow-ploughs are out all night clearing streets after a major snow-fall - but we do get lots of snow.

It's been so cold here - minus25C today! And our sidewalks are icy, as well as parking lots and the side streets. The salt trucks cannot get out fast enough.

No, you are not Scrooge. I too get cabin fever and need to get out to stretch my legs and breathe in fresh air, but it's homebound for me now until the cold snap is over.

As for a sense of community - it's gone. I remember when I was a child, people shovelled snow for each other, baked and cooked if someone was ill, took care of each other's children without being asked, ran errands, borrowed a neighbour's telephone if theirs was out of order or they just didn't have one (oh yeah - those were the days) and I remember my mother and her friends rolling up each others' hair over morning coffee. Nobody could afford a trip to the hairdresser and they enjoyed each others' company. And those were the days before blow-dryers. Mothers were home all day. There were no buses in our area so people pulled together.

So much has changed - but then it's inevitable, isn't it?

Oh my goodness, I'd go stir crazy too. Hang in there. Ice is treacherous, for sure.

it is sad that neighbors dont really act like it these days...fear of being sued...ack...what have we come to you know...glad you got out for a bit...and that your son took you to get provisions as well...we are expecting snow here tomorrow night...

Snow should stay on rooftops and fields only,and possibly lawns.. or on ski slopes in places abroad!

Yes, I heard that it is not true that people can sue for clearing pavements - obviously started by people who do not want to clear pavements. Yes it was great when everyone did so, like in the good old days. It was a sort of social thing as well, wasn't it.
I did ours a few days ago but only two people in the road did so - the other an 80 years young lady who is absolutely amazing. Eddie x

Here in the Southern part of the US, we get snow so infrequently that everything comes to a screeching halt because of it. No one here knows how to drive in it, and the people up North come down and make fun of us for not driving, but then they get in their cars and find that the little icy spots that the inadequate snow plows leave are more hazardous than just leaving it alone. We just learn to relax and stay in snuggled with a good book and plenty of comfort foods until it goes away - which is usually a matter of hours :) - not days. We've had years that it has lingered a while though, so I can empathize with your cabin fever feeling. Hope that yours clears up right away and things get back to normal soon.

Leave It To Davis said...

I feel just like you do about snow...the first day, it's beautiful and magical...after that, I'm ready for it to thaw.

I personally can do without the snow!! And Ice....YUCK!!
Sorry you are trapped! That is an awful feeling.
I turn on all the lights to give me the impression of a sunny day. Luckily I live in New Mexico...even though we get snow...it is usually sunny all day! Love it.
Hope your confinement ends soon
Hugs to you both
SueAnn

I would feel shut in too if I were not able to get out and about. Here each building is required to have the sidewalks cleared and kept that way. The streets are cleared by trucks and when needed, trucks drop sand and salt on the roads. It is pretty cold but at least we are able to get around and get groceries and visit friends. You are not a scrooge, I enjoyed reading your post describing your situation.

Oh no, the iceman cometh.

We are two miles from a road with 2 lanes and the little single track lanes don't get cleared. Living on a hill too where people regularly get stuck, I do know exactly what you mean about cabin fever, despite being an absolute sucker for snow!

The council should grit and clear pavements. Also, you need to get yourself some of those soles with spikes on them that you can attach to your shoes. Makes walking on icy pavements easier. And safer!

I love the first snowfall, and then I'm done. I abhor the ice. I live on a dead end and sometimes they clear the road but not as far as my house. But we don't get as much snow as you - I'm sure it gets old very, very quickly.

I hate driving in it.

Sorry you have been in so much, I too like to be free.

I was very surprised when the council came and put grit on our paths, we are on a very quiet road...it's a shame they waited until the thaw to do so!!

No, you're not alone. Here in Boston, we often get a snowstorm that leaves 6 or 8 inches. When I was a kid, I loved such a thing. With each passing decade, I enjoyed it about an inch less than I did before. So now, in my mid-50's, I can take about an inch. Anything beyond that and I begin to wonder why I don't live somewhere further south that doesn't deal with snow at all.