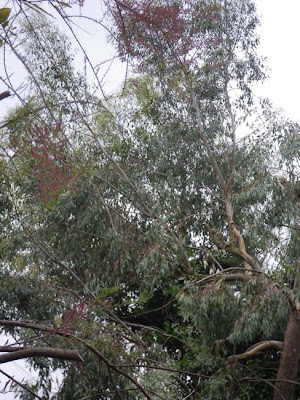 Photos Copyright: Maggie May
This is the view I have from my back garden of a lovely, tall eucalyptus tree. It belongs to a neighbour further up the terrace.
It is good to see trees and greenery in city gardens as the birds use the trees for nesting and perching.
My neighbour is very fond of any wild life that visits her garden and she puts out bird feeders, like I do.
I had seen blackbirds using this tree on a number of occasions and I regularly get a couple of them searching for worms in my garden. I don't have any lawn but they seem to know which bushes to search under for choice worms and I only posted about the way that they can pile half a dozen worms in their beaks without dropping any, the other day. It is amazing to see them at work.
Earlier in the year, I did think blackbirds were interested in nesting in my tall Eleagnus shrub and a nesting couple went back and forth for several days with twigs........ obviously starting a nest.
I don't know for sure what scared them off, but one evening I saw a huge carrion crow peeping over the wall, watching the proposed nesting site. Its face looked positively evil.
They stopped visiting the shrub after that, but continued to look for worms, especially during the evening.
The other morning, I heard the sound of a chain saw. I knew what it was because my neighbour had told me about the intended lopping of the eucalyptus tree.
The noise went on for a while. It certainly wasn't unusual. The tree is regularly cut back every few years in order to keep the tree's growth under control, as we all have fairly small gardens here.
Suddenly, the noise and commotion seemed to stop abruptly and the tree was left much taller than it had been on other occasions, but I soon forgot about it.
Later on in the day, I heard that the men had found a nest in the tree with several blackbird fledglings in it. They had feathers but were obviously dependant on the adult birds for food and protection. The men were postponing the rest of the pruning for a month in the hope that they will have flown the nest by then.
My neighbour was filled with remorse at having the tree surgeons in as she is the last person who would have caused harm to any wild life.
I must admit that I hadn't given a thought to the blackbirds being in the tree, though it was obvious that they were nesting somewhere near to me.
I thought that the poor fledglings would be abandoned after that intrusion, because the men had taken half the branches off the tree as you can see from the picture below and the saws did make a terrible noise.
These things happen, it wasn't done on purpose.
That night, I had my granddaughters for a sleep-over and next morning, while I was tidying their bedroom, I saw Mrs Blackbird sitting in a tree at the end of my garden with worms neatly draped in her beak. She flew straight to the eucalyptus tree, so I knew that the fledglings were still alive.
However, they are not out of danger yet because they now have to face that horrible carrion crow while they are learning to fly, as well as the half dozen or so cats marauding around the area, not to mention the fox. Oh well........ it doesn't pay to get too sentimental about them. It does seem to be a hard life though, if you are a bird.......especially if you are a feathered variety. 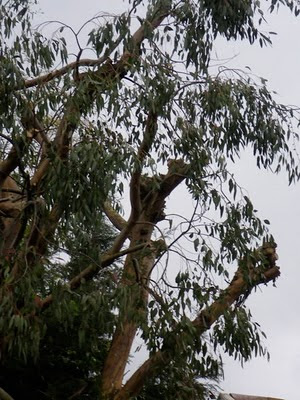 I guess, with respect to the baby birds, that all one can do is hope and pray that survival of the fittest includes them, huh?
I have a question for you though. Your mention of eucalyptus trees brought something to my mind. I know absolutely zilch about trees, gardening in general, etc., and definitely don't know what type of climate eucalyptus will grow in, so I'm wondering if the climate in your area is about the same as mine or if it is a tad warmer perhaps? I remember oh, about 20 years or so back going to my Uncle's place when he and his wife celebrated their golden wedding anniversary and they had floral centerpieces on each table there that had lots and lots of eucalyptus branches in them. My cousin gave me one of these to take home and as I recall, the scent from those branches gave a very pretty light fragrance in my living room for a long, long time after -a really long time, that is! Just wondering if a eucalyptus tree would be able to live in the climate here or if I'm maybe too far up north for them.

Glad the pruning stopped to give the fledglings a chance,
That horrible crow sounds a menace. Has Sam got an air pistol? I don't think the fox would be a real threat - hope not,

Nature is very cruel isn't it?
I'm catching up a bit today - as you know we are very busy with home improvements - puff pant! LOL
Love Eddie

Ah, poor little babies.
The men were very kind to stop and postpone their worl- I'm very impressed with that.
You're reminding me, Maggie, that I've been meaning for years to plant a Eucalyptus tree in my garden- I use Eucalyptus oil in aromatherapy and it's wonderful for colds, headaches, and, guess what- building your immune system- off out with you and get some of those cut branches now!
Lovely post!

awww, i hope they make it.

I am so glad they noticed the nest before doing much damage....even the old crow has to survive Maggie, and like everyone is doing the best it can. Love you.....:-)

We felt terrible recently when we had to remove a nest containing an egg from our guttering. :(

I hope the baby blackbirds survive.

I have birdfeeders and a bird bath in my yard too. I love to wake in the summer and hear them singing away. It's just so lovely.

House guest has 2 dogs. The one dog loves to chase birds. Loves it! I keep telling him they are MY birds and that I've looked after and fed them for many years and he can just bugger off with his barking, chasing, and attempts at shaking the trees.

It's not working. Sigh.

Hi Maggie May,
Sorry to be off topic but I see our friend Irene has deleted her blog and I had an email from her this a.m. saying she was very depressed. Have you heard anything?
I am really worried, it being mother's day and a bad day for her particularly.
XO
WWW

Hi Maggie,
It's good to know that the fledglings are still thriving. I'm sure if their mother is anything like you they will be fine.

And even if you are not feathered!

So nice to know that they cared enough to stop cutting the tree. Good, kind hearts at work there. The young are always at risk of course but it would seem that their chances are far better now than before. Thanks for sharing this story, Maggie.

Oh, I'm so glad that the Tree surgeons spotted the nest, and stopped...poor baby birds must have been scared by the noise...What a lovely story...I didn't realize that there were Eucalyptus trees in GB...I probably saw them...just didn't ever give it much thought. They grow like weeds in Southern California. Have a wonderful week, dear Maggie! Much love and hugs, Janine

When you stop and think about it, being an animal in wild life is actually very dangerous and you are lucky if you make it to adulthood or beyond. That's why I find some nature programs so hard to watch. At least the ones that tell a very realistic story. I hope your little blackbirds stay safe. I don't care much for crows either. We have quite a few of them in this neighbourhood.

Glad to hear the baby birds were spared for the nonce. We all are, in one way or another, eh?

That's awesome that they stopped what they were doing to hopefully save those baby birds!

I'm so glad they stopped the pruning to give those babies a fighting chance. I worry so much about all the nests around here, I watch them like I am their mother. It is so interesting to me, how protective they are and how they really do mother them. I once stumbled upon a nest on the ground, while I was weeding. It was the first time I ever saw a nest on the ground. It was beautiful, but I stopped weeding and had the pleasure of watching both mom and dad take care of them, until they flew away. That mom, was always watching, perched high above in the tree.
I hope they make it, keep us posted.
XXXXX

I have cried over baby birds that died nearly every spring at my old place... No garden anymore to attract them. Sweet little things!

Nature is an amazing thing - hope the baby blackbirds will be all right.

Thinking of you, Maggie...

It's all so worrying isn't it Maggie - I love to watch the birds but always found this time of year slightly stressful, worrying about the young birds and all the hazards they and the parent birds face!! A x

It's nail biting...do let us know what happens!

An award at mine for you today x

It's nail biting...do let us know what happens.

An award for you at my place today.

Congrats on your POTW mention! I'm so glad the birds will survive, but dang about the crow!
When we moved into a new house a couple of years ago, we needed to have the old satellite dish removed and another put in. When the engineer climbed up to take the first down, he discovered a pigeon's nest so the dish had to stay. This year I went too long before hiring someone to tackle our massive hedge and so now we wait for the nesting season to pass :-(

It certainly seems like a world fraught with dangers for those baby birds.

Thank goodness the men stopped cutting the tree and everyone involved is willing to give the new birds time to survive and leave the nest. Congrats on the POTW for this post. Very nice.

Congrats on the POTW mention from Hilary .. you have a great blog!

I'm so glad they stopped pruning!
nature is so hard and often cruel, I get my heart broken a lot as I do my best to care for the critters in my yard

I'm impressed and glad they stopped trimming the tree, and also glad to hear you saw the mama bird flying back to the nest afterwards with worms. Congrats on the Post of the Week!

Oh no. I love birds. : ). Kaish and Shoshi and Jonathon found one a few weeks ago. I can't believe I never posted it. I am so behind.

I hope your counseling appointment is helpful. I know that it was in the last post I read but I am still thinking about it as I leave a comment for this post. Will keep praying for you.