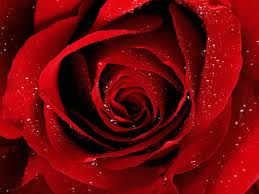 Harry and I had a very lovely weekend as Sam and Sandy married each other in our local Register Office which was followed by a fantastic reception in what used to be a Stately Home but it is now a country pub in beautiful surroundings with a huge hall for all the guests to do their own thing. In many ways, it was an unconventional wedding. The most noticeable thing being that the bride dressed in red and the groom had a matching red waistcoat.
Their four children each wore outfits that suited their personalities best. The youngest in a lovely netted, flouncy dress with a bolero in contrasting colour. The two middle girls, being tom boys, dressed in suits with brightly coloured waist coats and the eldest being a boy, decided on a dark suit with red highlights.
The guests were invited to take part in the entertainment and several relatives and friends recited monologues or sang or said something significant.
This was all followed by some really wild dancing, which I felt was really amazing.
It is a long time since I enjoyed myself so much, though it was an effort for Harry because of his illness but he enjoyed it too. He finds it hard to stay up late, though.
My daughter and grandsons stayed with us over the weekend mainly because of the wedding but also to bring back Harry, who had spent a week near London with that branch of the family supposedly to give me a break. However that is another tale for another time. 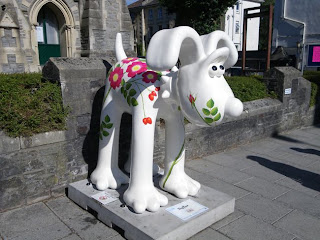 
I've been trying to hunt down some of the Gromits that have been scattered around Bristol. Altogether, there are 80 but one is in Paddington, London and some are in very remote places, beyond my reach.
So far, I have found about 25 and hope to visit some others within bus and walking distance, very soon.
I think the one in the picture, named Dog Rose, is my favourite.
Most of my relatives and friends are, or have been, on holiday over the past two weeks, so searching for Gromits has given me something to do.

I'm feeling a bit under the weather and plagued by what I hope, is Arthritis, and nothing else. I have to see my Consultant in early Sept, so in the mean time I keep going and hope for the best.
Harry, is not doing so well, either, now that his chemo is over and he is thinking of going on a drugs trial to help others who will be going through Prostate Cancer in the future. Its all you can do really, isn't it?

When A Small, Furry Creature Gets Sick 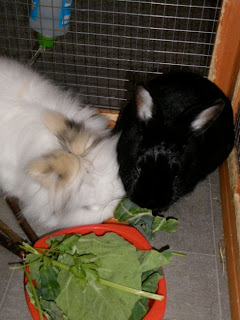 This is the way two healthy bunnies should be, munching their breakfast. However, if a rabbit becomes lethargic and stops eating for very long, the outcome can become very serious and sometimes fatal.
Their digestive systems are delicate and they need to be eating much of the day to keep everything working well.
When Lily went off her food last Thursday evening, I thought she must be suffering from the heatwave as we have no air conditioning in Britain. I opened all the doors but obviously couldn't leave windows or doors open when we went to bed and I wasn't sure how safe it would be to leave a portable fan running all night unattended.
The next day, she seemed worse, so I made a quick decision to take her to the vet because they aren't open from Saturday lunchtime till the following Monday. The large after hours emergency practice is in a different area so that I wouldn't have been able to get her there.
I set off with my animal carrier to my local vet and considered myself very fortunate that I erred on the side of caution and nipped things in the bud. She needed four injections and the bill was fairly hefty.
Within 24 hours she seemed back to her normal self.
I was quite pleased with my quick thinking.

On Saturday evening, I noticed Ash was very off colour and he appeared to be completely disinterested in food or drink. He sat hunched up with his eyes half shut and his fur looking very unkempt....the picture of abject misery. His ears were trembling uncontrollably.
My son and a friend who I can count on, who both have cars were away on holiday. In fact most people who would normally help me were on holiday. I thought there might be someone at Church who might take the poor animal to the emergency vet. There was nothing for it but to leave the bunny until the next day.
I had a very sleepless night. I expect most of you will be groaning with boredom and impatience if you have got this far, but I am very attached to these two furry creatures who are part of my extended family.

I got up at five am and crept down to see the state of the patient and noticed that he had moved and was using his tray.
Relieved to see he obviously wasn't dying, I managed to get two hours sleep.
Needless to say, Ash did recover by himself and he ate some breakfast when I offered it to him later on. By then, I could have throttled him because of all the worry that he'd caused.

Now the point of this account is...... that many people I spoke to said they wouldn't pay for expensive treatment for a rabbit. They would take their dog or cat to a vet, but anything small and furry must take its chance without treatment. I was fortunate that Ash recovered without  any injections but it could have got really bad by the time I got him to the vet and then might have been too difficult to treat as rabbits illnesses have to be caught early. As the rabbits live indoors, anything wrong with them is noticed earlier than a rabbit left in a hutch outside so that was an added bonus.

Surely, if one takes on an animal as a pet, no matter how small, then it is one's responsibility to get it treated if it gets sick. Otherwise maybe that animal should not have been taken on in the first place.
What do others think?