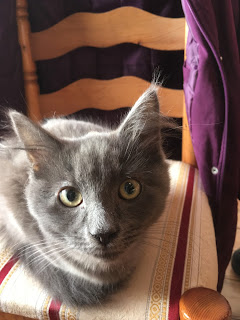 In the space of a few days, I have started to enjoy Advent and am well on the way with plans for Christmas.
Since my last post, I have quite got into the the spirit of it all and was asked last Sunday, to light the first Advent candle in Church. I'm also going to sing at a few different venues with one very large choir that I belong to and a smaller group in our church.
This week I'm going to meet a friend who has come over for a short while from USA, as she and her husband are staying in a Bristol Hotel and we'll have a pub lunch along with other friends (we've done this for a few years now). I've known her since we were 10 years old at school together. She travels all over the place to catch up with her many friends in England. She's been married to an American and has lived in USA for years.

These two adorable kittens belong to my granddaughters. They are 4 months old. The grey one is a tom and the black one is his sister.
They've just been neutered and spayed but seem to be racing around as usual so can't be in any discomfort.
It's good that I can go and play with them when ever I like but don't have the responsibility of looking after them with my unpredictable health problems and circumstances.
Although they have quite a few toys, the one thing that gets them really excited is a rolled up piece of paper that they toss about and chase at full speed round the house, causing mayhem all around them.
Now they've learnt how to jump on the table, it will be interesting to see how my son gets on with the Christmas catering. I've been invited along with my daughter and grandsons.
We are fully prepared to *muck in* as son put it but hope that doesn't mean cooking the whole thing! 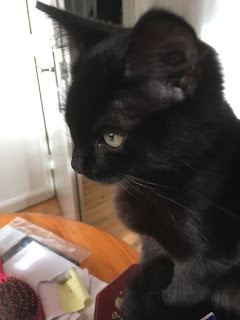 It's that time of the year again when I suddenly realise that Christmas is just round the corner and the panic starts to seep through.
Today is Black Friday. Well we didn't have that until recently when it started to spread here from America and I, for one won't be part of it.
I'm pleased to hear that so far, the big stores are not packed with people all fighting with each other as though their lives depended on getting a so called bargain that probably isn't genuinely a bargain at all. Some of the stores are empty of shoppers, put off by some of the scrabbles that amounted to violence during previous years.

I got out the Christmas cards this morning and looked at my list from last year. As usual I had to strike off several names of people who have died since last year. It's one of the depressing sides of ageing....people starting to pop off all around you.

On the positive side, there are all the activities and concerts that schools put on for our grandchildren. There are the choir practices for the carols at concerts and church that will be looming up. Christmas arrangements to be made with our families about who is going where and how we'll cope with the catering.
Surprises to think of.
How to go about decorating the house for Christmas this year...... if I decide to bother, though I probably will.
I like to think of the true meaning of Christmas but we've all got sidetracked with commercialism.

Of course for me, there's one very important person missing, but life has to go on. I always buy myself a present from him and can almost hear him saying, "Go on, treat yourself". He was a generous man. This will be my second Christmas.......

This spectacular display of model soldiers in shrouds was lined up outside College Green, near Bristol Cathedral today and will be there for several days.
A Somerset artist, Rob Heard, modelled these soldiers individually meaning that each one is unique and then he hand wrapped them in silk shrouds. This took him two years to complete.
Just under 20,000 men were ticked from a list of soldier conscripts and volunteers who fell on the first day of the Battle of the Somme, World War 1.

It is mind blowing to think this number of men were slaughtered on the first day of the Somme. Many more would follow.

We must never forget the great sacrifice that was made then and in all the wars since, so that you and I could have our freedom.

First it was Brexit and now Trump!
Over here, it has been likened to *Brexit on Steroids!*
People on this side of the Ocean are really shocked and dismayed. Some American Nationals on local Radio were crying while some were overjoyed.
While I completely agree with democracy, and we must have that at all costs, I really hope that our fears are unfounded and that it will all work out well.
In the meantime, I will miss the Obama family and the way they conducted themselves in an upright way with grace and dignity.
Posted by Maggie May at 09:21 16 comments: