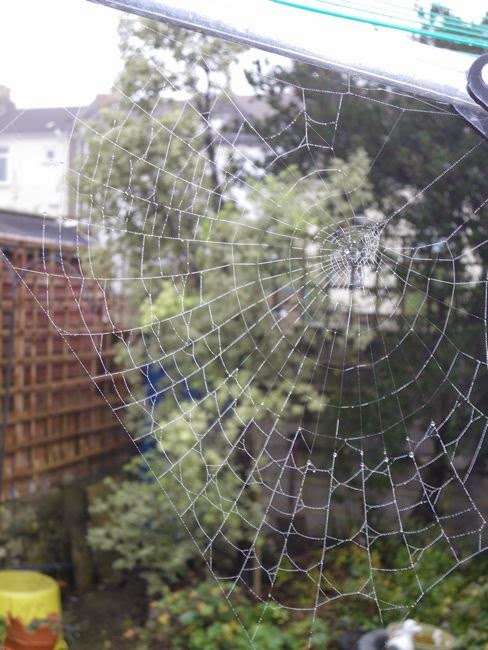 Aren't Spider's webs beautiful? When you come to think about it, they are so cleverly and laboriously made, considering they come from a creature that causes so much distaste and fear, to some, anyway You either love them or hate them, especially if they accidentally brush right across your face when you walk through the garden.
This one was noticed before I loaded my washing on the rotary one early morning when the dew was still on it.

We're still having mild weather and I have roses out in bloom which seems really weird in November.
I have seen on TV the havoc that parts of USA are having with heavy snow falls at present and obviously the weather is really being affected by Global Warming. No one seems to be getting their normal weather anymore.

I have some good neighbours and every bin collection that is due, Karen's husband kindly wheels my whole assortment of bins and recycling boxes out to the pavement on the evening before collection. I also wheel out my other neighbour's bin because he keeps forgetting to empty his. This struck me as rather funny. The one with a bad back having her bins moved to save her from being injured, who then wheels out another neighbour's bin because he keeps muddling up when he has to put it out. Between us, though, everybody seems to be happy.
Have you got good neighbours? 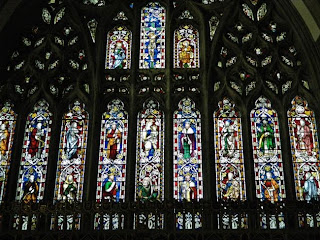 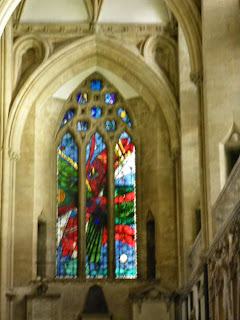 I recently went into our city Cathedral on impulse on one of my Thursday afternoons off. I hadn't been there for a good while and although I had to be careful walking in a dimly lit building because the floor levels seemed quite uneven in places with unexpected steps going up or down, I did feel that the windows were so spectacular and luckily I had my camera with me.
I'm sure my photos don't do them justice but I was overawed by the magnificence of the large windows in the traditional style of Bible illustrations and I was also taken with this small modern one in a corner that I found by chance.
The whole place had a kind of aura of peace and I felt quite small thinking of all the generations of people who had worshipped there and walked before me.
There were memorial stones underfoot wherever I went and tombstones in recesses.
Do other people have these sensations when they go into a very old building/church/cathedral?

Our weather seems to be really muddled and we have experienced sunny days followed by constant rain. A bad day can follow a good one and then it goes back to the bad. The temperature of each day is very varied too from mild to decidedly chilly. I should think the flora and fauna would be really baffled by it.

I was very moved to see the thousands of ceramic poppies that were put around the Tower of London, in a place that used to be the moat. It was meant to be a sea of blood, to represent the soldiers lost in all the recent wars, from WW1 to the present time. Although I got to see it on TV, I wasn't able to go to London. There were thousands upon thousands of individual poppies that were *planted* there, each one representing a soldier who was killed. Even viewing it on TV gave me a really moving feeling of all the suffering that had been caused in the past and is still being caused through war today.
I think you could still Google the Tower of London poppies if you haven't seen this spectacle that was created by an artist for Armistice day on 11th November.

I am amazed/almost dismayed at the amount of Christmas things that are already filling up the shops. Apart from vaguely totting up whether I shall have enough Christmas cards, I haven't given it much thought.
I have some important Birthdays to get through first.
Is it too soon to be thinking of Christmas?

I think I can honestly say that November is my least favourite month.
However it started in a really strange way, being unusually warm and sunny.
There was a BBC News announcement yesterday, saying that Halloween was the warmest ever recorded. We were walking around in short sleeves and this was unheard of when I was young and probably in all the years that I can remember and that's quite a few.
I've recently had my daughter and the two grandsons staying for the best part of a week. It was really lovely to have them. The youngest one is now over 6ft tall and almost knocks his head when he goes through the kitchen archway.
Now they have left, it is quiet and Harry and I are getting into our routine again. He loves routine and I suppose it helps me to get everything done in some kind of order.
I organised the helper to come on Thursday even though I had visitors and I was really pleased that I was taken to Clevedon, a small seaside resort fairly near to Bristol but too far for me to normally go in the allotted time that the sitter is here, in my daughter's car. That was a lovely treat, especially as the weather was so pleasant. I noticed I was not as good at walking as I was when I last went there a couple of years ago. Cranky hip and knee pain and a numb foot slows me down considerably. Oh well, what can you expect at my age?
I thought I would just mention that I'm having a bit of a problem leaving comments on some blogs, so I'm sorry about that. It is mainly when people use Blogger+ and I've decided not to use it. I also find that some other types of blogs won't let me comment either. I wonder if there is some kind of button that some of you haven't pressed to let ordinary bloggers in?
One other of my blogging friends has also noticed this. Have any of you had problems?