From a Sunny Bench 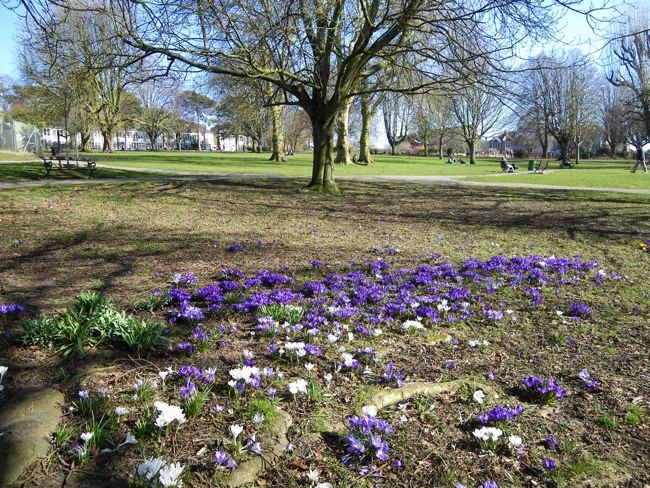 
One really sunny day, last week, I decided to walk through the local park and weave my way round all the paths, eventually sitting down on a handy bench in the sun. It was good to feel the warmth on my face and it wasn't long before I started to watch the people around me.
The park had been planted up with spring bulbs under the trees and it was good to see swathes of colours brightening up the rather muddy bits of the park. Later on, during the spring and summer, there are usually areas of wild flowers randomly sown, as well as more formal rose beds, that are now devoid of leaves because they've been heavily pruned.

There were a good few people walking their dogs and most of them were let off their leads for a good romp round. They obviously loved to scamper about and looked really exuberant, which was good to see. Most of the owners were extremely responsible and threw an object out onto more open grassy areas and it was interesting to watch the way these pets went about retrieving the balls or sticks and some times toys. Some dogs ran out into the far distance, picked up the ball and brought it back to the waiting owner. Obviously this was a wonderful way of exercising a dog without having to walk very far. Some animals picked up the ball and then dropped it again, turning round and going back to the owner without it. It was their way of saying, "I've found it, now go and pick it up for me again." The obedient owners did just that.
Some of the dogs while off the lead, did walk through the flowers but I noticed they were walking quite daintily through them causing the minimum of damage.
However, I was a bit gobsmacked by a few owners who let their dogs off the lead and threw a ball right through the flowers and rose beds letting their animal trample the plants down as they focused on the ball. One or two of these owners appeared not to even notice the flowers and threw the ball into them over and over again.
There were plenty of grassed over wide open places where they could have thrown a ball.

The more responsible owners could be seen carrying little bags of dog mess ready to dispose of in the bins provided.  However, some were so busy talking and had their backs to the dogs making it impossible to see whether they'd made a mess or not. Judging by the little droppings that have to be watched out for when walking on the grass, this is a regular occurrence.
It is a great pity that a few have to spoil it for the rest of the responsible citizens who use the park.
Maybe I should have taken my book and then I wouldn't have noticed any of it.
I am an animal lover and think dogs should be allowed off their leads under supervision but I like to see flowers and well kept grass too. A compromise is called for as well as good sense, don't you think?