Everything Can Change In A Week! 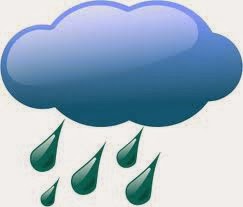 Last time I posted about sunshine and Spring but everything can change in a week.
This morning I found my heavy wheelie bin had blown backwards on to my neighbours low wall during the night and there was a foot of water in it. That must have been a heavy storm and it went on till lunch time and there's more of the same forecast.
I was amazed that I didn't hear the wheelie bin go over in the night as it must have made quite a clatter.
I suppose we are very lucky where we live because not so far away, much of the Somerset Levels are flooded and the only way some of the residents can get to and from their homes, which are now surrounded by water, is by boat. They have been stranded like this since before Christmas and some homes are still filled with stagnant water. Help seems to be very slow coming. What does one do about a situation like this? Can't sell up. Who would buy? As it's happened the second year running, could anyone afford insurance?

This weekend was the RSPB Bird Watch and I usually take part in it. Over the last few weeks we've had sparrows and blue-tits, blackbirds other species who have frequented my bird feeders. However, without question, during any of my bird watch weekends, they are never about. With Millie's help yesterday, we only spotted one lone magpie and today there were only two wood pigeons who visited within any hour of watching.
Maybe this post will jinx the weather into changing again. In the meantime, there are tips of spring bulbs showing through the wet soil. Looking for the sun, like all of us.

A Spring In My Step 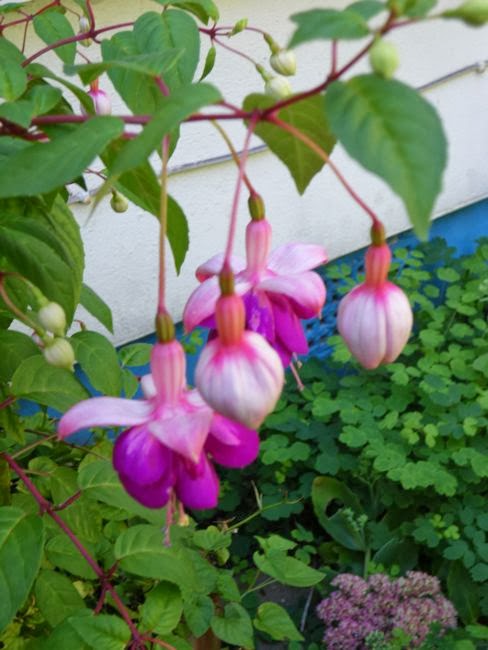 I think we've probably had rain practically every day since before Christmas and I'm sure that this winter will go down as one of the wettest ever. However, today was really sunny and I was able to go out in the garden and do some weeding and general tidying up. It was good to take stock of what is growing and what needs to be replaced.
There are still flowers that are blooming out of season, though not as healthily as the fuchsia  that I snapped last summer. The weather is still quite extraordinarily mild, though.

Last Saturday my odd job man put up a section of trellis between my neighbour's and my garden where I'd had my Eleagnus cut back and greatly reduced. The small section behind it now looks bare and I want to train a Clematis over the trellis if possible.
After I'd done the gardening I decided to go out for a walk and get some exercise. It was really pleasant and I found myself on the High St where many of the shops were open even on Sunday. I browsed round the Charity Shops and found a double jigsaw that looked in very good condition so I snapped it up. Harry groaned when I came back with yet another one. I always recycle them back into a cancer charity when I've finished with them though.
What things can't you resist if you go round a Charity Shop?

A few weeks ago, I was lent a book *The Various Haunts Of Men* by Susan Hill, an unknown to me, authoress.
It was, I suppose, a detective story and I don't normally go for this type of book. However, this was a detective thriller with a difference. By the time I'd finished it, I was completely hooked and found out that this was the first of a series of the detective, Simon Serailler, books. I had to have the next one and to read them all in sequence because each book had reference to the last and many of the characters were the same.

So what was it that made this book different from the usual detective stories that I'd avoided up until now?
I would say that I was urged to read on in a tantalising way. There were several main characters involved and different chapters told the perspective of one or other of these people who all had a communal part in the story. So I was whizzing through to find out what happened to each of these characters and the book was teasing me on all the way through.

There was something about Simon Serailler that was very human as he was a family man and was very involved with his sisters, niece and nephew and his mother but was a bit estranged from his brother and father. By reading these books, his family became very much a part of the stories and I found I could identify with a lot of the family storyline.
Apart from the huge amount of crime in the small, fictional cathedral town of Lafferton, (and there has to be an exciting story line to keep the reader happy) much of the portrayal of Simon's life style was credible and the stories, though some of them were a bit gruesome, came under the thriller title and made compelling reading, I thought.
Anyway, I'm well onto my fifth book in the series and still feel I want to read more.
Anyone else hooked? 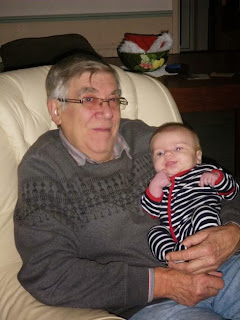 What better way to start the New Year than with a photo of my brother, Eddie and his grandchild, Peter?
Our daughter met up with her two cousins and my grandsons met their new great cousin when Harry and I went to visit just after Christmas. Now that is getting quite complicated...... cousins and great cousins and Peter being our great nephew. Anyway, it was lovely to have the reunion whatever we are all called.

I decided not to make any rash New Years resolutions this time round such as going on a diet and doing more housework as I mightn't be able to keep to the pledge.
However, I do want to get all the jobs that need doing in the house and garden fixed this year. Things that I cannot do and I have started the ball rolling by hiring a friend's husband who does odd jobs. He came today to do a few of them and to at least tell me the things that are too difficult for him.
He will be back again in a fortnight to put some trellis up.
Some of the jobs that I need to do would require a qualified plumber and I'm working on getting somebody to give me a quote but it is good to have an odd job man to do the simpler things. Yes, I think this will be my New Year's Resolution....... to keep the place from falling into total disrepair.
What are the things you have decided to do this year?