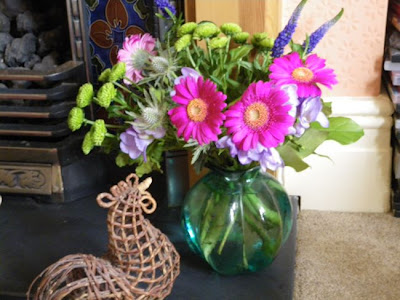 Last week I went for the first two of my 30 sessions of radiotherapy.
I didn't really know what to expect but it seems that I just have to lie very still on my stomach, after being lined up by humans .... then the machine takes over. It moves over my head and turns round and sometimes it seems dark and sometimes not. I have no idea what is going on, and can only hear the different noises that the machine makes as it goes its own way. Nothing hurts and there is no feeling when this beam of radiation is being shot into precise parts of my body. As long as I keep still all is well. If I need them to stop, then I can raise my hand and then they will interrupt the cycle. There is someone watching me all the time and obviously someone must be in control of the machine, behind the glass screen.

Before the first session, I waited half an hour in the waiting room, but last time I was kept waiting a good deal longer than that, so it does take a chunk out of the day and its best to take a book.
The department is 2 stories down in the basement so there is no daylight coming in or fresh air and whatever they use instead of this, makes me very sleepy.

When I came home from the very first session, my husband told me that I'd had flowers delivered by hand while I was away.
I had no idea who they could have been from until I opened the little card. It was from Denise Nesbitt. Some time ago, before I knew about my tumour on the coccyx........ Denise told me that one of her chickens was leaving home and heading for Bristol and could she stay with me?
I had no idea why she'd want to leave the beautiful countryside where she'd been living........ but was very pleased to receive Chicken Nesbit into my home. You can catch up with her arrival, HERE.
Chicken Nesbitt has been looking out of my dining room window since then. Occasionally she falls down onto the netting on the rabbit run and I have to untangle her feet.
Anyway...... she seemed to sense that the flowers were from Denise and her other chickens and she had to go and have a look and sniff them!
They are beautiful flowers, Denise, and I was truly overwhelmed by your kindness.
Thank you so much.
Just proves that blogging friends, however virtual they may seem to be, can be really supportive and kind and break through the ether, occasionally.

I have had another visit from my daughter and grandsons over the weekend, which was really lovely. I don't usually see them as often as this because they live nearly 200 miles away. I must have really scared my daughter when she came two weeks ago and I was in such pain. However, she can see that things have really improved since she was last here and that must have been a relief.
As it was the Balloon Fiesta in Bristol and the weather was not that brilliant, we didn't think that we stood much chance of seeing many hot air balloons over this way. However, on several occasions we looked into the sky from our road and saw great clusters of them floating slowly in the distance and we could hear the burners as they boosted their height. Radio Bristol announced that 62 took off together.
It was naturally on our local television news and we were dismayed to see that one unfortunate lady who was sleeping in her bedroom at the time, heard a noise like an explosion and found that a balloon had crashed into the side of her house. No one was hurt and you can read about it and see the picture here.

I wonder what this week will bring?

I must need sleep. Or maybe it is just my bad sense of humor - but that lady will have a whopper of a story from here forward - how many of us have had a balloon crash our home!! lol!

Glad your treatments are underway - what happens if you fall asleep and twitch? Have to start again?

Continuing to offer prayers for you during your treatments!

What a lovely surprise and how those beautiful flowers and the chicken must have cheered your spirit and your soul! I don't know what the heck they pipe into doctor's office or waiting rooms in hospitals and such but it almost always makes me very sleepy too! I usually didn't have enough time to take a nap while getting my radiation treatments but frequently took naps while getting the chemo! Hope things continue to progress and they are right on target with the radiation beams so that nasty little bugger there is eradicated quickly. Just really glad your pain has been eased up a bit for you!

I'm keeping everything crossed that all your treatments go well Maggie. It's always lovely to receive flowers - how kind of Denise. :)

You have such a great attitude. You end this post wondering what the next week will bring. Hugs to you.

How sweet and kind your blogging friend is, Maggie!
Also, I'm glad that you posted about your radiotherapy. I have no idea what is involved in the treatment, and it was very interesting to read about yours. I would have a hard time being still, Maggie. I think that knowing that I had to be would even make it worse.....sigh.
Love to you, my friend.
J.

So nice to see what arrived - I asked for "something bright & cheerful" from Denise and the chickens - there was a slight pause at the other end of the phone but I am quite use to that by now! lol! The room sounds quite drab - so pleased you can take a book xxxx

How sweet...the flowers are lovely and i like your chicken as well ♥

Oh, that poor lady must have got a huge fright!

Hope you are spared any side effects of the radiation.

Beautiful flowers, how thoughtful of you friend.
It does sound very drab where you have your radiation, the most important thing however is that the machine does its job. Sorry you have such a long wait, I would be in and out in a matter of minutes and yes you do have to keep still. (I still have my tiny tattoo marks where the laser beams were to go)
Happy that your daughter is there with you, sending big hugs ad many prayers to you, Harry and family,

30 Maggie? Gosh. Good luck with each and every one.

How lovely of Denise.

The flowers do look cheerful.

I hope that the radiotherapy department can improve their time keeping. It is very bad form to keep people waiting.

Happy Frog and I said...

I'm glad to hear you are receiving treatment and that it isn't causing you pain.

I did see the story of the balloon this afternoon and thought of you. x

Maggie, it must be a good feeling to get started on your treatment, sooner it'll be finished.
You have a marvellous way of describing things, in great detail and still a good read.
Hope all continues to go well, pity about the waiting around but a book is a good idea.
The flowers are beautiful!

I hope this week brings you continued healing and peace.

It is so cool to know that bloggers like Denise do such kind things. Enjoy the flowers and get better.

I'm glad to hear that you got the first two sessions out of the way, Maggie. Let's hope that all of them do the job they are supposed to do. I am full of good faith. I hope you are too.
What lovely flowers you got and what a thoughtful gesture that was. I hope they really cheered you up. I'm sure they did.
I think about you often and try to send you positive vibes across the Channel. I hope they reach you.

It is always lovely to receive flowers and even better when they are unexpected. Do hope the treatments go well for you Maggie. Have been thinking of you and wishing you well. A x

Beautiful flowers and such a nice gesture of your friend especially during this time. May is wish you didn't have to go through this and I hope and pray it's your last time. ((hugs))

I'm not sure next week can top that balloon crash! Glad to hear you are feeling the improving, relieving effects of your treatments.

I would just like to wish you well with your Radiotherapy.

A year ago I too was undergoing radiotherapy (36 sessions)...Like you I am a Grandparent (63yrs). I found the treatment made me feel very tired even WITH daylight and fresh air. I am now on six monthly checks having graduated from three months and it appears to have worked for me......I am just off to Gibraltar to cycle back to the UK.

I trust that your treatments have the same desired effect for you.
I will continue to follow your blog .
-Trevor

I think it is not very kind to have patients waiting for radiation. It gives one too much time to think and I wouldn't want to be thinking all that much. It's bad enough that the department is always in the dungeon of hospitals, usually, and it's, more than often, not a very cheery spot.

How sweet to be welcomed home with such a cheery gift.

I've been up twice in a hot air balloon over the Napa Valley. I'm really afraid of open heights and the blast of the burner really made it worse...but, after a little while, I finally relaxed and really enjoyed the fabulous scenery.

I'm thinking of you, lovely lady, on the far side of the pond.

How nice to receive flowers! And from a blogging buddy too. I agree. Even though our friends in bloggerland are virtual, they are real people and good friends.

I'm glad the radiation doesn't hurt and I hope your treatments go well and quickly.
Hugs

What a lovely thing for your friend to have done. I hope that you are in the early stages of a fabulously quick recovery.

What will this week bring??

If all goes well, it will bring you a painting. "Maggie's English Garden" is in the hands of the US Postal Services as we speak! Let me know when it arrives!

Everyone....... many thanks for your kind wishes and comments. I will no doubt, get back to regular blogging before too long.

Lovely flowers, and even the chicken looks impressed!
Good luck with your daily treatments m'dear - all good wishes go with you.♥

thanks for dropping by new home Maggie...

and no l dont see my daughter at present...she seems to be in another space and really havent seen her since new year...

I'm really glad to hear the radiation treatment isn't painful. I sure hope it's doing what it's supposed to be doing!